819 Hans-Christian Oersted accidentally discovers the deflection of a magnetic needle in the presence of an electric current.

1820 Jean-Baptiste Biot and Félix Savart study the properties of the force undergone by one of the “magnetic poles” of a magnetic needle. From this work, Pierre-Simon de Laplace (1742-1827) established the law allowing the calculation of the magnetic field produced by a current element at a given distance from this current element. This law bears the name of Biot and Savart.

1822 Peter Barlow (1776-1862) builds what can be considered the first electric motor in history: the “Barlow’s wheel” which is a simple metal disc cut in a star and whose ends plunge into a bucket containing mercury which ensures the arrival of the current.

1831 Michael Faraday (1791-1867) discovers electromagnetic induction: the creation of a current in a conductor from a magnetic field.

1832 Hippolyte Pixii, builder of physics instruments in Paris, produces the first electric induction machine comprising a magnet rotating opposite the poles of a fixed electromagnet. It is an alternating current generator which makes it possible to obtain direct current thanks to an Ampere switch, that is to say two half-rings fixed to the axis allowing the reversal of the polarity. It is already the start of a blade collector. Joseph HENRY observes the spark occurring at the opening of an electrical circuit and names this extra-current breaking phenomenon. It is the discovery of self-induction.

1833 Heinrich Friedrich Emil Lenz (1804-1865), Russian physicist of German origin, establishes the law which gives the direction of the induced current.

1834 Russian professor Hermann von Jacobi builds a one-horsepower motor that will propel a paddlewheel boat on the Neva in Saint Petersburg. The inductor and the armature are horseshoe-shaped electromagnets carried by a movable crown and a fixed crown facing each other. The switch called “gyrotrope” reverses the excitation of the moving electromagnets to the appropriate positions. But this engine is bulky and, ultimately, it is the American Thomas Davenport who will be the real inventor of this kind of machine. We owe Jacobi the notion of “counter-electromotive force”.

1838 Charles Grafton Page builds an induction coil which can be considered the ancestor of the Rhumkorff coil. Construction of an electric motor similar to the single-acting piston of steam engines, the steam being replaced by two U-shaped electromagnets.

1840 Bourbouze electric motor. The pistons of a steam engine are replaced by electromagnets energized alternately by means of contacts controlled by a “distributor” drawer.

1845 Gustave Froment (1815-1865) builds the first variable reluctance machine. It is a rotary motor comprising a ring of fixed electromagnets which attract iron bars carried by a wheel.

1856 Heinrich Ruhmlorff develops the coil which bears his name, based on the work of his predecessors and turns it into a powerful scientific instrument that he markets.

1864 Work of Professor Pacinotti (1841-1912) on electric machines five years before Gramme, he publishes in Nuovo Cimento a communication on a ring rotating in a magnetic field, which foreshadows the armature of electric machines, which he envisages using both in generators and in motors. Not having been able to go beyond the experimental stage, his achievements remain without result.

1868 The Englishman Wilde makes the first dynamoelectric machine or dynamo. It replaces, following the work of Ernst Siemens, the permanent magnet by an electromagnet supplied by an auxiliary machine.

1869 The Belgian inventor Zénobe Gramme (1826-1901) born in Jehay-Bodegnée (province of Liège), makes possible the realization of direct current generators by imagining the collector. He improved the first archaic versions of alternators (1867) and became famous by rediscovering the principle of the Pacinotti ring armature. In 1871, he presented the first industrial direct current generator to the Académie des Sciences in Paris, which was called the Gramme machine and which was in fact a magneto.

1879 Edison presents its first incandescent electric lamp (with carbon filaments) which stays on for 45 hours.

1881 France organizes, between August 1 and November 15, an International Exhibition of Electricity which consecrates the birth of Electrical Engineering, underlined by an International Congress of Electricians which sits in Paris from September 15 to October 19. The great novelty is the industrial use of the Gramme dynamo.

1884 Lucien Gaulard (1850-1888), young French electrician, chemist by training, presents to the French Society of Electricians a “secondary generator”, since called transformer. Faced with the skepticism of his compatriots, he turned to the Englishman Gibbs and demonstrated the merits of his intervention in London. In 1883, Lucien Gaulard and John Dixon Gibbs succeeded in transmitting for the first time, over a distance of 40 km, alternating current at a voltage of 2000 volts using transformers with a core in the form of bars.

In 1884 Lucien Gaulard put into service a looped demonstration link (133 Hz) supplied by alternating current at 2000 volts and going from Turin to Lanzo and back (80 km). We then end up admitting the interest of the transformer which makes it possible to increase the voltage delivered by an alternator and thus facilitates the transport of electrical energy by high voltage lines. The recognition of Gaulard will come too late.
In the meantime, patents have also been taken by others. Gaulard’s first patent in 1882 was not even issued in its day, under the pretext that the inventor claimed to be able to do “something from nothing”! Gaulard attacks, loses his lawsuits, is ruined, and ends his days in an insane asylum. The Gaulard transformer of 1886 does not have much to envy the current transformers, its closed magnetic circuit (the prototype of 1884 included an open magnetic circuit, from where a very poor performance) is made up of a multitude of wires of iron announcing the laminated circuit with insulated sheets.

Thus, in 1885, the Hungarians Károly Zipernowsky, Miksá Déry and Otto Titus Bláthy developed a transformer with an annular core marketed throughout the world by the firm Ganz in Budapest. In the USA, W. Stanley develops transformers.

1885 Galileo Ferraris, Italian engineer, introduces the principle of the rotating field in the construction of electric motors.

1886 Georges Westinghouse (1846-1914), American inventor and industrialist born in Central Bridge (State of New York), founds the Westinghouse Electric Corporation. He became interested in industrial electricity and founded the Westinghouse Electric Corporation. This American group, producer of electrical and electronic equipment, has become the number two American in the sector, behind General Electric. It also manufactures household appliances and television sets, and has developed its activities in the nuclear sector: the group has owned the PWR (Pressured Water Reactor) process for producing nuclear energy, which is the ancestor of the process implemented. in France by EDF.

After obtaining a patent for a transformer in 1887, he built a first alternating current network in Buffalo for lighting.

1887 Nikola Tesla (1856-1943), Yugoslavian electronic engineer born in Smiljan, Croatia, founded a company for the construction of alternators. Thanks to his work, alternating current will win the battle of remote transport and the use of alternating current.
Tesla first advocated the use of polyphase currents (1882) and succeeded in creating a rotating magnetic field which made it possible to drive a rotating mobile armature in rotation. The first experiment for large-scale energy transport is made in Germany. It is the realization of a 175 km long line between Lauffen-on-the-Neckar and Frankfurt-on-Main. And the yield achieved is already 75%!
In 1890 he imagined the first assembly producing a high frequency current. Tesla is continuing research work. We owe him the famous Tesla assembly in the field of radioelectricity but that does not prevent, as with other inventions that he can make, that he too does not end his days in poverty. The unit of magnetic induction in the SI system is named after the tesla (symbol T).

1890 The first underground electric locomotive is put into service in London.

1906 The first electric vacuum cleaner is marketed under the name of “dust pump”.

1920 Washing machines are equipped with an electric motor.

1923 A 220 kV overhead line is commissioned for the first time in the United States.

1924 Construction begins on a 110 kV north-south overhead line connecting German coal-fired power stations near the Rhine to Alpine hydraulic power stations. The first section from Neuenahr to Rheinau is equipped with 380 kV pylons – a subsequent increase in power is thus guaranteed (partial commissioning in 1929 with 110 kV and in 1930 with 220 kV).

1937 The first hydrogen-cooled turbo-alternator is put into service in the United States (power of 100 MVA).

1965 Biggest ever blackout in the electricity supply: On November 9, New York went 13 hours without power after lightning struck a 345 kV line.

1966 Commissioning of the first overhead line (380 kV) to Germany, from Beznau to Tiengen.

1967 Connection to the network of the world’s first tidal power station (240 MW) located on the Rance estuary (France).

1967 The very high voltage networks (380 kV -> HTB today 400 kV) of France, the Federal Republic of Germany and Switzerland are interconnected for the first time at Laufenbourg.

1972 Felix Blaschke lays the foundations for vector control of synchronous and asynchronous machines by publishing his work (“The Principle of Field Orientation as Applied to the New Transvektor Closed-Loop Control System for Rotating-Field Machines,” Siemens Review, vol. XXXIX, No. 5, pp. 217-220, (1972)). It took about fifteen years for his theoretical work to be applied in industry. The time for microcontrollers and microprocessors to become fast enough that they can perform the necessary calculations in “real time”.

1978 A serious incident occurs at the Three Mile Island nuclear power plant near Harrisburg / USA (without consequences for the environment).

1983 Commissioning of the first large wind power plant at Growian near Brunsbüttel (Germany) (rotor 100 m in diameter; shutdown in 1986 due to material problems).

1986 An accident with serious consequences occurs at the Chernobyl nuclear power plant (Republic of Ukraine).

August 14, 2003: During the largest power outage in American history, approximately 50 million people were left with power for two days.

Why the electrical empowered? 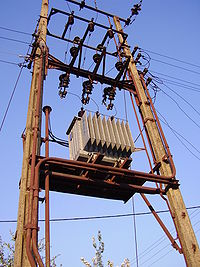