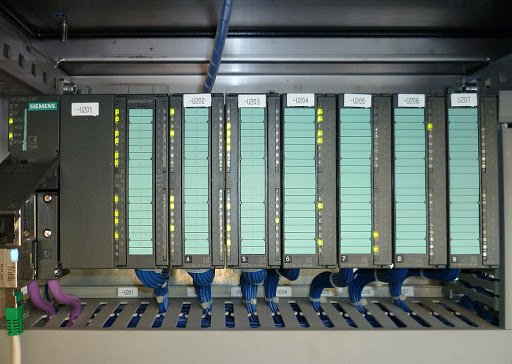 Industrial Programmable Logic Controllers (PLCs) appeared in the United States around 1969 where they responded to the desire of the automotive industries to develop automated production lines that could keep up with changing techniques and models.

An Industrial Programmable Logic Controller (API) is an electronic machine that can be programmed by non-IT personnel and intended to control industrial processes in real time in an industrial environment. A programmable logic controller can be adapted to a maximum of applications, from a processing, component and language point of view. This is why it is of modular construction.

It is generally handled by electromechanical personnel. The development of the industry leading to a constant increase in the electronic functions present in an automatic system is why the PLC has replaced relay cabinets due to its flexibility in implementation, but also because in cabling and maintenance costs were getting too high.

Automation makes it possible to add additional elements to the value added by the system. These elements can be expressed in terms of objectives by :

The main characteristics of an industrial programmable logic controller (PLC) are :
cabinet, rack, bay or cards

The internal structure of an industrial programmable logic controller (PLC) is quite similar to that of a simple computer system. The central unit is the grouping of the processor and the main memory. It controls the interpretation and execution of program instructions. The instructions are carried out one after the other, sequenced by a clock.
Two types of memory coexist :
– The Program memory where the programming language is stored. It is generally fixed, that is to say in read-only mode. (ROM: read only memory)
– The data memory that can be used in read-write during operation is RAM (random access memory). It is part of the input-output system. It freezes the values (0 or 1) present on the input lines, each time this is taken into account, it stores the calculated values to be placed on the outputs.

The programmable controller receives the information relating to the state of the system and then controls the pre-actuators according to the program written in its memory.
Generally, industrial programmable logic controllers operate cyclically (Figure 4.5). The microprocessor performs all the logical AND, OR, timing, counting, calculation functions, etc. It is connected to the other elements (memory and I / O interface) by parallel links called ‘BUS’ which convey the information. in binary form. When the operation is said to be synchronous with respect to the inputs and outputs, the processing cycle begins by taking into account the inputs which are frozen in memory for the entire cycle.

The processor then executes the program instruction by instruction, each time storing the results in memory. At the end of the cycle, the outputs are assigned a binary state, by placing in communication with the corresponding memories. In this case, the response time to a change in state of an input can be between one or two cycle times (average duration of a cycle time is 5 to 15 ms Figure).

There are other, less common modes of operation :

6– Description of the elements of an API:

There are two types of memories in PLCs which fulfill different functions:

– Memory Language where the programming language is stored. It is generally fixed, that is to say in read-only mode. (ROM: read only memory)
– The work memory that can be used in read-write during operation is RAM (random access memory). It is automatically cleared when the PLC stops (requires a backup battery).

Its role consists on the one hand in organizing the various relationships between the memory area and the input and output interfaces and on the other hand in executing the program instructions.

They are intended to receive information from the sensors and adapt the signal by shaping it, eliminating interference and electrically isolating the control unit from the operating part.

They are intended to control the pre-actuators and signaling elements of the system and to adapt the voltage levels of the control unit to that of the operating part of the system, ensuring galvanic isolation between them.

– Fast counting cards: they allow the acquisition of high frequency information incompatible with the processing time of the PLC. (signal from a position encoder)
– Axis control cards: They allow the precise positioning of a mechanical element along one or more axes. The card makes it possible for example to control a servomotor and to receive positioning information by an encoder. Position control can be carried out in a closed loop.
– Analog input / output cards: They allow the acquisition of an analog signal and its digital conversion (ADC) essential to ensure processing by the microprocessor. The reverse function (analog output) is also performed. The analog quantities are standardized: 0-10V or 4-20mA.
– PID regulation cards
– Weigh Cards
– Communication cards (RS485, Ethernet …)
– Remote input / output cards

The processor can perform a number of logical operations; the set of Boolean instructions of the additional program management instructions (jump, storage, addressing …) constitute an instruction set.

Each automaton has its own set of instructions. But on the other hand, the manufacturers all offer a programming software interface meeting the IEC1131-3 standard. This standard defines five programming languages that can be used, which are:

Ladder Diagram language is based on a symbolism very close to that used for classic wiring diagrams. The most used symbols are given in the following table:

Automated systems are, by nature, the source of many dangers (tensions used, mechanical movements, jets of material under pressure, etc.).

Placed at the heart of the automated system, the automaton must be a reliable element because a malfunction of this one could have serious repercussions on the safety of the people, moreover the costs of repairs and a stop of the production can have serious financial consequences.
Also, the controller is subject to numerous provisions to ensure safety :
– External constraints: the controller is designed to withstand the various constraints of the industrial world and has undergone numerous standardized tests.
– Power cuts: the PLC is designed to withstand power cuts and allows, by program, to ensure correct operation during resupply (cold or hot restart)
– RUN / STOP mode: Only a technician can start or stop a PLC and the restart is done by an initialization procedure (programmed)
– Cyclic checks:

– Visualization: The PLCs offer a visualization screen where you can see the evolution of inputs / outputs

The standards prohibit the management of emergency stops by the PLC; this must be carried out in wired technology.

With the development of automated systems and electronics, the search for lower costs and the current need to be able to manage production as well as possible and from the moment when all the equipment is of the computer type, it becomes interesting to interconnect them. to a mini-computer or to a supervision PLC.

The interconnection between two PLCs can be achieved very simply by connecting one or more outputs of one PLC to inputs of the other and vice versa.

This method does not allow internal variables to be transferred directly from one PLC to another, so that these must be converted by program into output variables before their transfer. It becomes expensive in terms of the number of inputs / outputs mobilized for this use and heavy from the point of view of cabling, when the number of variables that must be exchanged becomes large.

To reduce the costs of wiring the inputs / outputs of PLCs, field buses have appeared. The use of remote I / O blocks first of all made it possible to meet this requirement.

The input / output interfaces are deported as close as possible to the sensors. With technological development, sensors, detectors … have become intelligent “and have made it possible to connect directly to a bus.

Several communication protocols and standards have appeared to ensure the “multiplexing” of all the information coming from the sensors / preactuators, for example the ASi bus (Actuators Sensors interface) is a bus of sensors / actuators of the Master / Slave type which makes it possible to connect 31 slaves (sensors or preactuators) on a specific cable (two wires) carrying data and power.
This bus is completely standardized and allows the use of technologies from several manufacturers

A common processing center exchanges with each of the other stations. Two stations cannot directly exchange with each other. Example of the BITBUS field network of the company INTEL

Each station can communicate with its neighbor. This solution is useful when a station must receive information from the previous station or transmit it to the next.

It is the most efficient form of networks. It offers great flexibility of use, the information being able to circulate between stations of the same level or circulate from the most advanced station (generally a computer) to the simplest, and vice versa.

9- Criteria for choosing a PLC

The choice of a PLC is generally based on:

– Processor type: the memory size, the processing speed and the special functions offered by the processor will allow the choice in the often very wide range.
– Special functions or modules: certain cards (axis control, weighing, etc.) will make it possible to “relieve” the processor and must offer the desired characteristics (resolution, etc.).
– Communication functions: the PLC must be able to communicate with other control systems (PLC, supervision, etc.) and offer communication possibilities with standardized standards (Profibus, etc.).

10- Implementation and diagnosis of an PLC :

During its first implementation, the system must be tuned.

There are two ways to check operation:

A malfunction can be caused by:

This check is carried out using a voltmeter-ohmeter and a shunt (piece of electric wire). 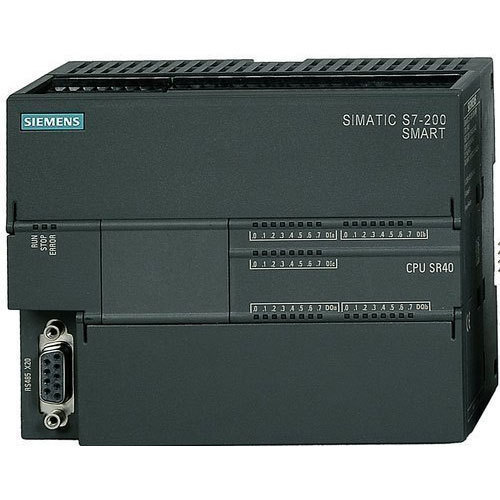 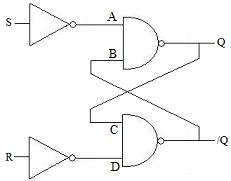 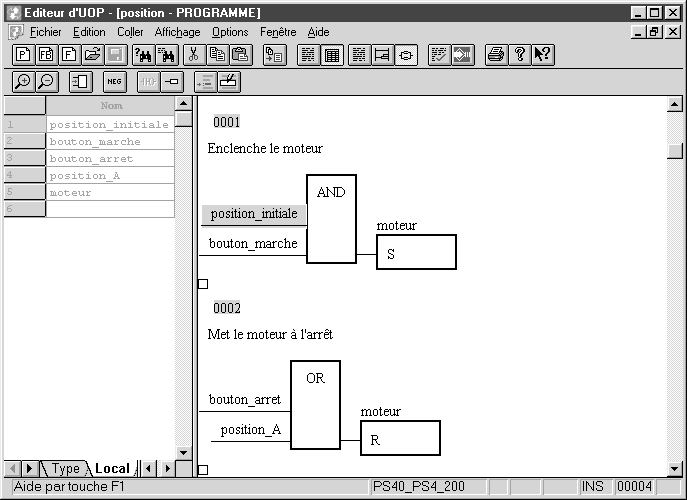