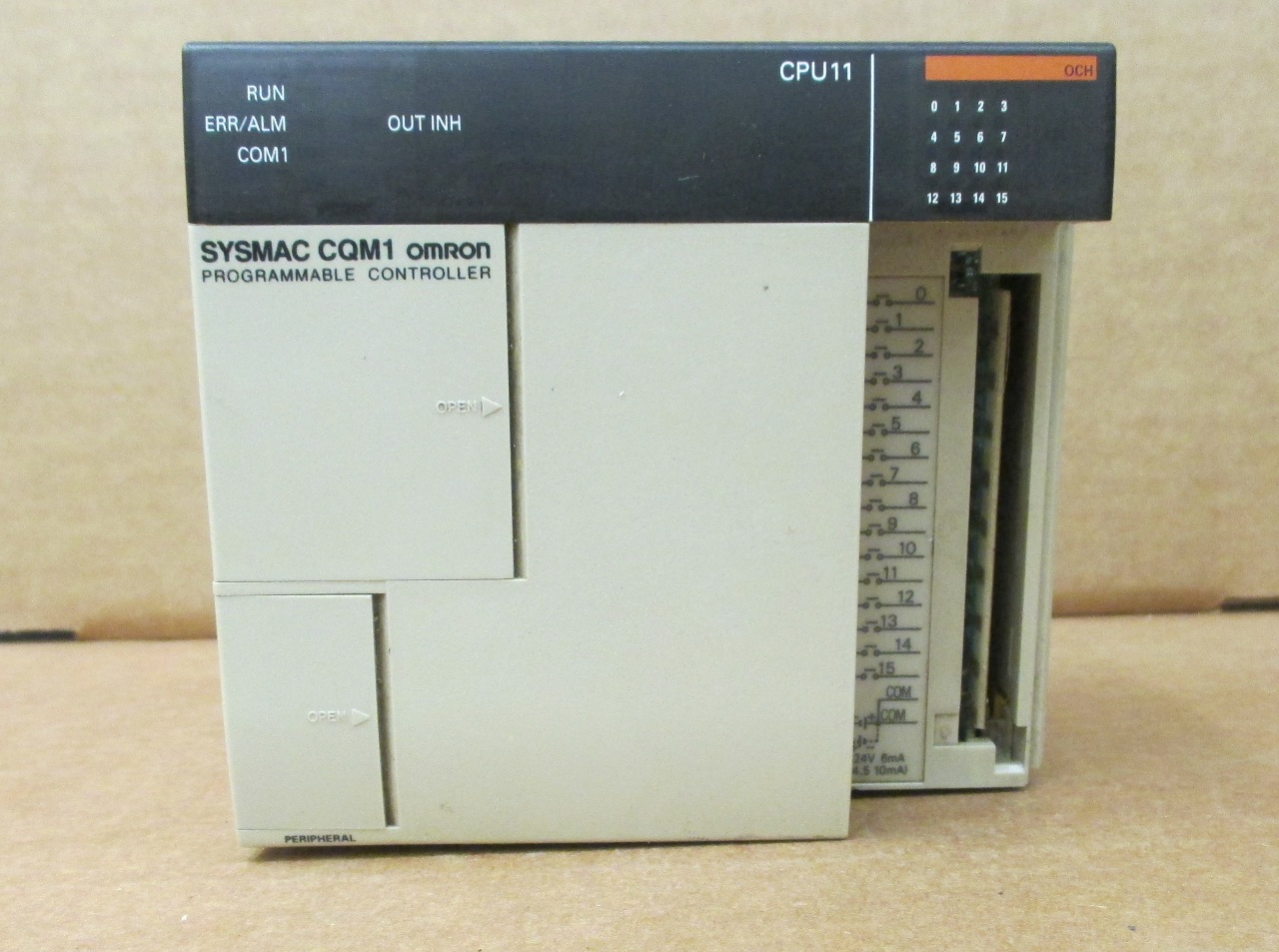 The CQM1 is a compact OMRON Industrial Programmable Logic Controller (PLC), programmable with SYSWIN software, consisting of a power supply, a central unit (CPU) and I / O boards. All of these cards connect on the side to form a single PLC that typically mounts on a DIN rail.

All CQM1 CPUs, except CQM1-CPU11-E, are equipped with an RS-232C port which can be connected directly to a computer, another CQM1, or other serial devices.

The “SYSWIN” software allows programming of “OMRON-CQM1” PLCs used in many automated systems. Addressing (coding of input, output and intermediate variables) and the definition of some logic instructions are presented below.

3– Structure of the memory area

There are several basic steps involved in writing a program :

There are two types of ladder diagram instructions:

Most instructions have at least one associated operand. Operands provide information regarding the execution of an instruction. They are sometimes entered as real numeric values but generally correspond to zone channel addresses or to bits containing data to be used.

6- The basics of the ladder diagram

Whatever the programming device, the program is stored in memory in mnemonic form, hence the importance of this code.

The program is presented in the program memory in the form of addresses. Each address contains an instruction and all operand data and operands necessary for that instruction. Some instructions do not require operands and others up to 3 operands. Program memory addresses start at 00000 and run until capacity is exhausted.

Here is an example of mnemonic code; the instructions used will be described later:

The first condition of a logic block in a ladder diagram corresponds to a LOAD or LOAD NOT instruction. Each of these instructions requires a line of mnemonic code.

When several conditions are in series on the same row, the first corresponds to a LOAD or LOAD NOT statement and the others to AND or AND NOT statements. The following example shows three conditions corresponding from left to right to LOAD, AND NOT, and AND statements. Each of these instructions requires a line of mnemonic code.

6.2.4- Combination of AND and OR instructions

When AND and OR instructions are combined in more complex schemes, they can sometimes be viewed individually, with each instruction performing a logical operation on the condition and the state of the operand bit. In more complicated diagrams, however, it is necessary to consider the logic blocks before being able to determine the execution condition of the final instruction.

The easiest way to output the results of a combination of conditions is to do so directly with OUTPUT and OUTPUT NOT. These instructions are used to check the state of the designated operand bit according to the execution condition. With the OUTPUT instruction, the operand bit turns ON (or OFF) respectively as long as the condition is ON (or OFF).

Although apparently simple, the diagram below requires an AND LOAD statement. The two logic blocks appear in dotted lines. This example shows

The following diagram requires an OR LOAD instruction between the top logic block and the bottom logic block. An ON execution condition is produced for the right instruction when IR 00000 is ON and IR 00001 is OFF or when IR 00002 and IR 00003 are ON. The operation and mnemonic code of OR LOAD are exactly the same as those of AND LOAD, except that the current execution condition is linked by OR with the last unused condition.

Combination of AND LOAD and OR LOAD

When determining the logic instructions necessary for coding a diagram, it is sometimes necessary to divide the latter into large blocks and then in turn divide these blocks to arrive at logic blocks which can be coded without forming instructions into logic blocks. These blocks are then coded by combining the small blocks first and then the larger blocks. AND LOAD or OR LOAD is used for the combination of blocks: they always combine the last two execution conditions, whether they result from a single condition, from logical blocks or from previous logical block instructions.

In complicated diagrams, the blocks are coded starting from the top left and then going down. When we have the choice, we therefore code OR LOAD before AND LOAD.

The following diagram should be split into two blocks and each block into two other blocks before coding. As can be seen, blocks a and b require an AND LOAD instruction. Before AND LOAD, however, OR LOAD must be used to combine the top and bottom blocks of both sides, i.e. to combine a1 and a2 as well as b1 and b2.

If several right-hand instructions are executed with the same execution condition, they are coded successively after the last one.

condition of the row. In the following example, the last instruction line contains an additional instruction corresponding to an AND with IR 00004.

When an instruction line splits into two or more other branch lines, it is sometimes necessary to use branches or TR bits to maintain the run condition that existed at the branch.

You can use 7 basic instructions to individually control the state of the bits: OUTPUT, OUTPUT NOT, SET, RESET, DIFFERENTIATE UP, DIFFERENTIATE

DOWN and KEEP. All of these instructions appear at the end of an instruction line and have a bit address as an operand.

The DIFFERENTIATE UP (rising edge) and DIFFERENTIATE DOWN (falling edge) instructions are used to set the operand bit ON for one scan revolution at a time.

These two instructions only require one instruction line in mnemonic code.

When the execution condition of the end of the second line is ON, the operand bit of KEEP is set to OFF (latching). The KEEP operand bit maintains its ON or OFF state even if it is located in a branch. The unlock bit takes priority over the lock bit.

STIM (––) is used to control the tempos. cyclic which are used to activate interrupt subroutines.

CNT is a decrementing counter instruction and CNTR is a reversible counter instruction. Both require a TC number and SV; they are connected to multiple instruction lines and serve as an input and reset signal. CTBL (––), INT (––) and PRV (––) are used to manage the high speed counter. INT (––) is also used to stop the pulse output.

Any TC number can only be defined twice, that is, once it has been used as an operand field in a tempo instruction. or counter,

it cannot be reused. Once defined, TC numbers can be used as many times as desired as operands in other instructions.

that tempo. or counter.

SV is between 000.0 and 999.9. The decimal point is not entered. Each TC number can be used as operand data in a single TIMER or COUNTER instruction. A timer activates when its execution condition turns ON and is reset (to SV) when the condition turns OFF. When activated, TIM measures in 0.1 second units from the SV.

CNT is used to count down from the SV when the count pulse condition, CP, changes from OFF to ON, that is, the current value (PV) is decremented by one each time. time that CNT is executed with an ON condition for the CP and the condition of the last execution was OFF. If the execution condition has not changed or has changed from ON to OFF, the PV of CNT remains unchanged. The end flag of a counter turns ON when the PV reaches zero and remains there until the counter is reset.

CNT is reset using a reset input, R. When R changes from OFF to ON, the PV is reset to the value of the SV. The PV is not decremented when R is ON. The downcounting from SV starts again when R turns OFF. The CNT CP is not reset in the connections or in the event of a power failure.

Here is an illustration of the above in the form of a diagram and corresponding mnemonic codes:

7- Quick diagnosis of the PLC

The following diagrams can be used to resolve possible operational problems. 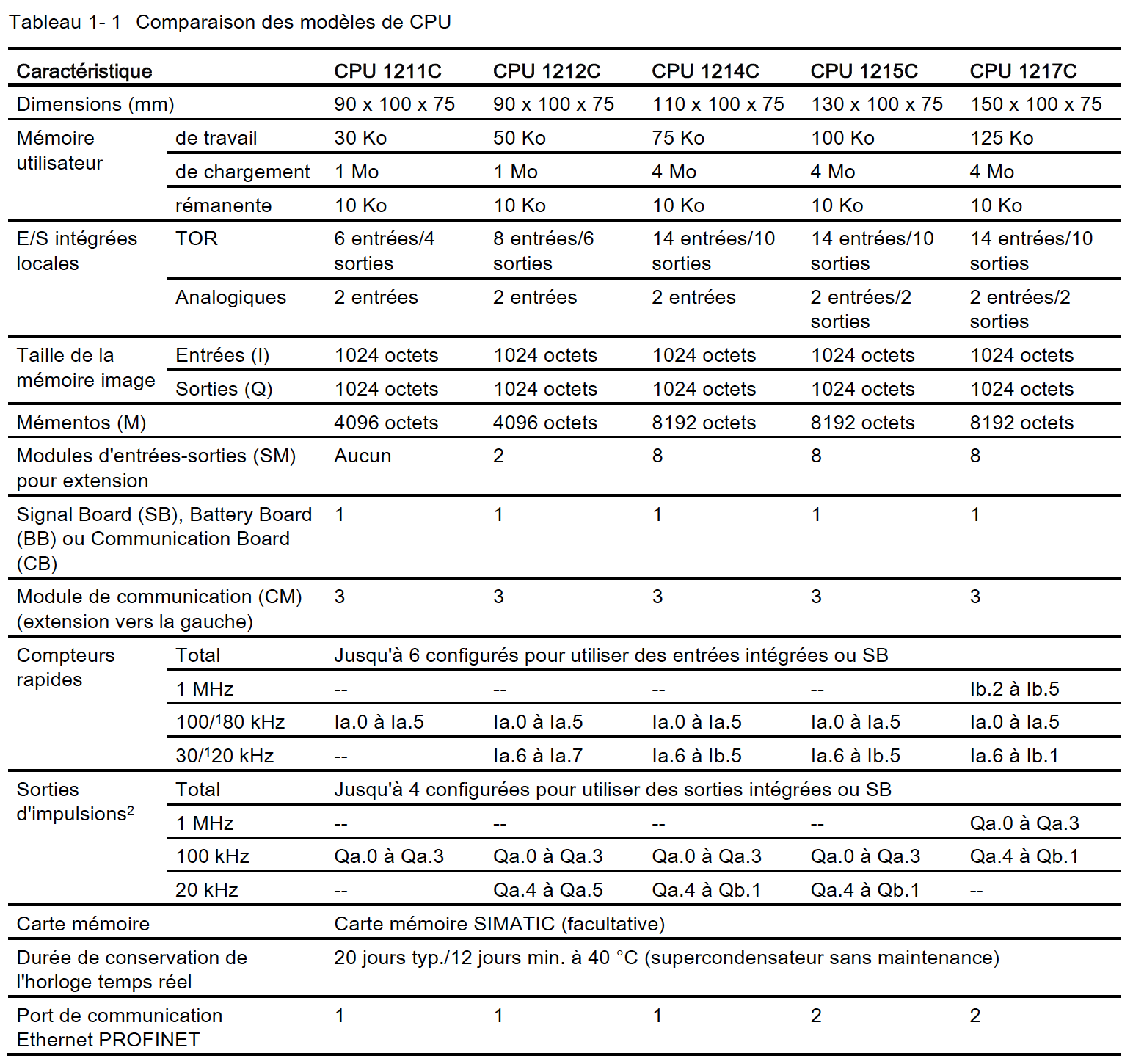