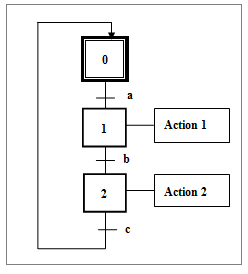 Either the following automated system:

This solution has one drawback: to stop the trolley, you have to press Stop when the trolley arrives at A. This is not satisfactory. The idea is to have a grafcet that reads the buttons and controls the other. It will be a supervising grafcet:

In more general and more complex cases, the master grafcet (supervisor) takes care of the starting, the sequence, the synchronization and the stopping of various tasks. Each task is described by a grafcet commanded by the task management supervisor or grafcet, this is referred to as the Notion of hierarchical structures

2. Hierarchical structure of a grafcet:

In sequential automatisms, it is common to encounter repetitive sequences in the same cycle. A repeating sequence can be represented by a sub-grafcet or grafcet sub-program. This notion of is borrowed from computer language.

There is another method of returning the hand to the master grafcet, which is the most used. It uses an output step with a time delay to keep the variable X25 at 1 for 1 s in order to give control back to the master. This method is called “Asynchronous coordination”

The purpose of the spots is to simplify and facilitate the description of complex systems by lightening the graphics of a grafcet and by separately detailing certain parts. (to be compared with IT programming procedures)

2.3. Structure of the macro-step expansion:

A macro step is a single representation of a set of steps and transitions called the expansion of the macro step.

Note: No action must be associated with a macro-step.

The structure of the expansion obeys certain construction rules, namely:

expansion always has an entry step (E) and an exit step (S);

the entry step is active as soon as the upstream transition of the macro-step is crossed;

the activation of the expansion exit step triggers the crossing of the downstream transition of the macro-step;

2.3 – Forcing and freezing of situations:

When we want to take security into account, we risk having a significant increase in the complexity of a Grafcet. Instead, one can imagine that one grafcet can have a global influence on another grafcet through the use of special actions called macro-actions.

Forcing is a continuous action, noted in a double frame, which acts on the graph Gi, hierarchically inferior “or” slave “by configuring this grafcet, from any situation, in a given state.

You can also force a grafcet:

The rules of evolution by forcing are:

This is a special case of forcing. It is a question of maintaining the forcing in the current situation, ie blocking the evolution of grafcet. The order of freezing can also be towards a situation chosen in advance or predetermined, that is to say that the forced grafcet continues to evolve until the chosen situation where it will freeze. 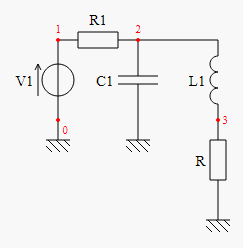