In this article we will introduce you to the different video acquisition cards offered by Advantech for machine vision applications, also called vision frame grabber.

In the automotive industry, quality control has become extremely important. More often than not, engineers are called upon to check a lot of equipment such as the dashboard, doors, seats, lights, color, etc. There are thus a hundred items of equipment to be checked on a vehicle, which leads to a search for a system carrying out an automatic inspection.

In order to achieve automatic and efficient quality control, system integrators have turned to optical inspection with many cameras and robots.

To meet this demand for the acquisition of large video streams on Ethernet network cards, Advantech has designed a series of GigaByte cards with specific functions such as:

The Advantech PCIE-1172 and PCIE-1174 video acquisition cards provide 2 or 4 independent channels for the acquisition of Gigabit Ethernet cameras for machine vision.

This card is to be inserted in a PCI express x4, x8 or x16 slot. The card is equipped with 2 or 4 RJ45 1000 ports with LEDs showing POE activity. On the bottom of the bracket, the 15-pin SUB D connector is used to connect the digital inputs / outputs. Below are the specific functions of these 2 cards.

On a typical ethernet network card, the GigEVision protocol is software that runs on the host processor. The processor must use a lot of resources to manage and manipulate network traffic and incoming camera frames rather than applying machine vision algorithms, especially in high bandwidth applications.

With the PCIE-1172 and PCIE-1174 cards, the GoE (GigE Vision Offload Engine) function will relieve the processor of this task. An FPGA component will transfer the incoming frames from the cameras directly in DMA.

With the Ad Hoc network functionality, the connection between cameras and video acquisition is configured automatically. The user does not have to configure the IP address

The PoE function will simplify the installation of the equipment. The cameras will be powered directly by the Ethernet network communication cable. The card which is supplied with 12Vdc will internally generate the 48Vdc necessary for PoE
If the card is supplied with 12Vdc by the PCIEx4 buses, a maximum of 18W can be used on the POE. On the other hand, if we bring an external 12Vdc to the rear connector of the card, the maximum consumption is 60W on the 4-port card.

There are two opto-isolated digital outputs for each ethernet port, each digital output is configurable in three different modes:

In ToE mode, the digital input of the channel used on the PCIE-1172 / PCIE-1174 card must be connected to an external trigger source, such as a position sensor. The card then sends the image acquisition command via the Ethernet cable as soon as the input is activated. The camera is triggered and transmits its video frames. Then the camera goes into standby mode.

Two approaches are possible for controlling cameras with CamNavi: The user opens CamNavi Viewer to control the camera. In a second approach, the user can create a custom application with the CamNavi SDK. Video frames are acquired either piecemeal or continuously. It is also possible to control the operation or not of DMA GoE.

The PCIE-1672E and PCIE-1674E video acquisition cards are server network cards (Intel i350 ethernet component) designed for machine vision video acquisition applications. They have 2 or 4 RJ45 10/100/1000 connectors.
These 2 Frame Grabber type cards take over the PoE, Jumbo Frame 9KB functions described previously on a PCIExpressx4 bus.
The power delivered to the POE is also identical. an LED area on the card square allows viewing of POE activity.

Version V of these cards, namely PCIE-1672V and PCIE-1674V, has in addition a unique function to control the On / Off of each port.
With the software interfaces provided, you can manually activate or not the POE power of the cameras. This is either for disaster recovery or for resetting the camera power. A light version of these cards, without PoE power supply, the PCIE-1672L and PCIE-1674L is announced by Advantech.

In addition, Advantech also offers a Frame Grabber card in USB. This card, the PCIE-1154 is a PCIex4 4 port USB expansion card. It uses the Fresco FL1100 host controller in USB 3.0. Bandwidth is 5 Gbps per port when using all four USBs simultaneously.

It also has a current of 1500mA on the four USB 3.0 ports to ensure stable power to external USB devices. Unique, it has a locking mechanism of each USB cable for a reliable connection.

The PCIE-1154 card is a high bandwidth industrial grade expansion card designed for connection to 4 USB ports of cameras in machine vision, industrial automation and medical applications, as well as in any other application requiring High data transfer speeds. 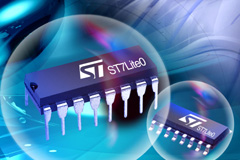 What is a microcontroller?